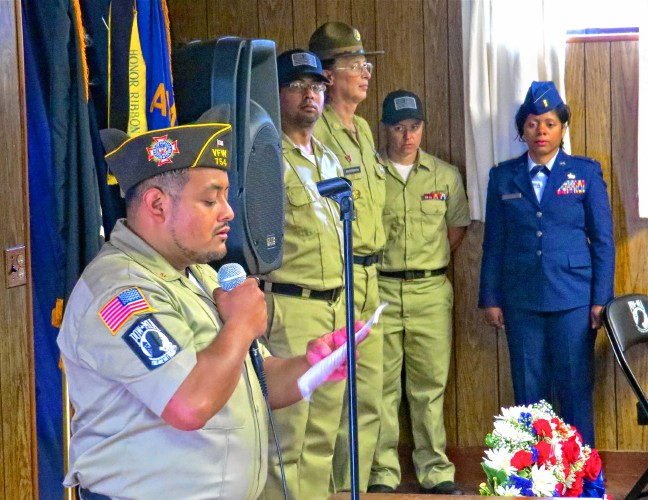 By ERIC GOLDSCHEIDER
For the Gazette

AMHERST — America’s troubled racial history, along with remembering the sacrifices of military families, were the themes at the Memorial Day ceremony on Monday.

Ray Elliott delivered the keynote address, speaking about indignities suffered by his father, William Elliott, an African- American soldier who served during World War I. He was a member of the 92nd Infantry Division, which was among the black regiments sent in response to the French government’s request for reinforcements.

The result was that the French offered to take the soldiers under their command and, according to Elliott, "they fought so valiantly that the French government gave my dad and his regiment the highest honor they could give for battle.”

Yet, when the elder Elliott returned home to Cambridge, his local chapter of the Veterans of Foreign Wars "which at the time, of course, was very lily white,” refused to welcome him, Elliott said.

That prompted William Elliott to found the first black VFW post in Cambridge, which still exists, according to his son.

Ray Elliott, 92, spoke to a hushed audience of about 150 people in the hall of the Amherst VFW Post 754 on Main Street, where events were moved after the annual parade was canceled because of rain. 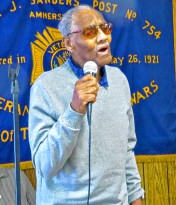 Elliott also spoke of his own experiences "serving in a segregated Army in the Second World War.” One of the stories he related was about being sent for training in Biloxi, Mississippi, where his commanders instructed the black soldiers to travel in pairs when they left the base to look out for each other, but not in larger groups, because "three is a crowd.”

Still, Elliott recalled the experience of fearing for his life when he was taunted by a group of whites who he regarded as "a lynch mob.”

Elliott, who sat down for the second half of his 20-minute speech as he joked about his age, received a sustained standing ovation at the conclusion.

Retired Amherst College physics professor Robert H. Romer spoke about efforts to erect a monument in the West Cemetery to honor black soldiers from Amherst who fought during the Civil War. It was supported this year by Town Meeting with a $5,000 appropriation.

Romer explained that this undertaking began when he discovered that Christopher Thompson, a Civil War veteran, was buried in the cemetery but without a marker, "probably because a gravestone was a luxury that Christopher’s family simply couldn’t afford.”

The monument to be erected soon will serve three purposes, said Romer. "It will give Christopher the recognition he deserves.”

It will also alert visitors to the fact that a section of the cemetery was traditionally used for African-American burials and finally, he said, "It will indicate to visitors that a significant number of black men from Amherst fought for freedom in the Civil War.” 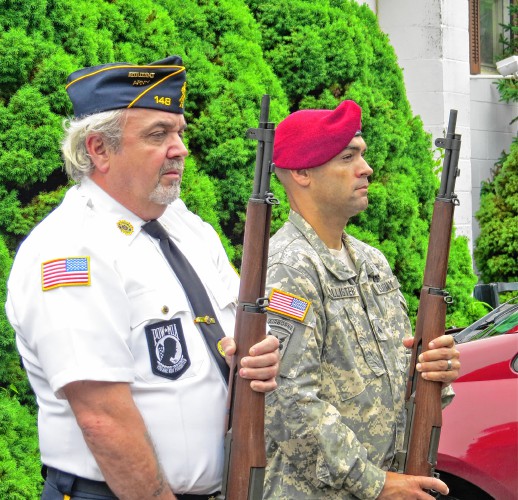 Other speakers included Rebecca Fricke who told the audience about a "service flag,” she is making as part of a group called the Fiber Artists of Western Massachusetts. It is hanging in the museum of the Amherst Historical Society in the Strong House on Amity Street.

"This started me thinking, what if we had a service flag like that for Amherst now? How many stars would we have on the flag? Who would those stars represent?” explained Fricke.

As a result, she is asking members of the community to come forward to share personal stories and short biographies of people from Amherst who have served in the military. Each of them will be represented by a star on the flag.

"I’m up to about 30 something names and I know there are many many more,” said Fricke. "I see myself now as the flag lady – this is what I am going to be doing.” As people bring her more names, she places them on the museum label next to the flag.

Story said she has known Elliott, who is a former president of the local chapter of the NAACP and former member of the Human Rights Commission, for 35 years but has never until now heard him tell some of his war stories. She told him, "I, for one, would be delighted to listen to as many war stories as you have.” 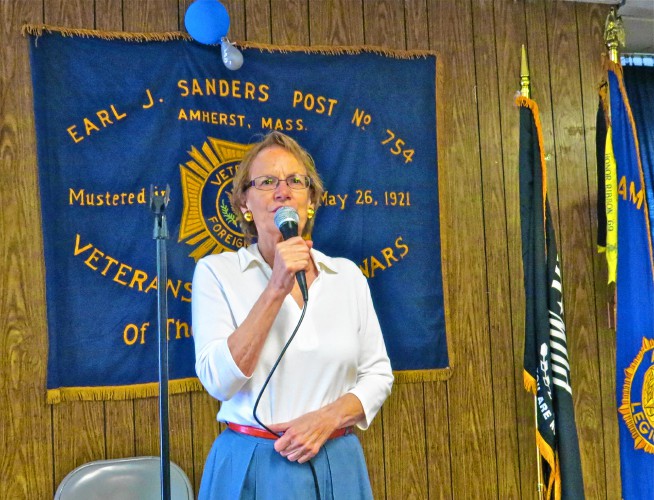 Eric Goldscheider can be reached at eric.goldscheider@gmail.com.