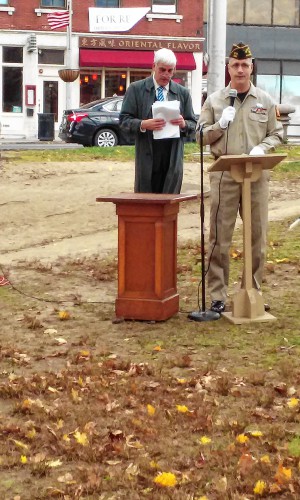 AMHERST — About 50 people gathered on the North Common in front of Town Hall Friday to commemorate Veterans Day and recognize the role that members of the armed forces play in preserving American democracy.

"Our gathering is a small spark in the flame that burns across the nation today and every day," said Master Sgt. Charles Thompson, an Amherst native who served in both the U.S. Marine Corps and U.S. Air Force Reserves.

A new member of VFW Post 754 in Amherst, Thompson said service members are ordinary people who feel compelled to serve during extraordinary times, and put their own lives at risk.

It’s important, he said, to honor these heroes and recognize their achievements, though some won’t return home alive.

"Nothing can ever replace the hole left by a fallen soldier," Thompson said.

Thompson asked all veterans, and families of veterans, to raise their hands so he could appreciate them.

"Thank you very much. You have made our armed forces the most respected in the world," Thompson said.

Before the American flag and a Prisoners of War were raised and then lowered to half staff during the National Anthem, performed by Alana Holmes Martineau, Rev. Anita Morris, the chaplain for the VFW, led the invocation that referenced the political climate.

In her prayer, she asked God that love overcome hate and that social justice counteract discrimination based on gender and race.

Morris also prayed for President-Elect Donald Trump to act compassionately toward Americans, and the world, while continuing to instill the best in the military.

"May he have just and right ruling for all humankind," Morris said.

Select Board Chairwoman Alisa Brewer said the Veterans Day event is a good reminder that veterans make their home in town, often invisibly, "and that we need to think of concrete ways to ensure they continue to remain part of Amherst."

This is already being done by the local Veterans Services, according to Veterans Agent Steven Connor, after working with Soldier On to provide housing for veterans in Leeds and Chicopee, and helping Craig's Doors: A Home Association ensure any veterans who come to to the Craig’s Place homeless shelter can rapidly be provided housing.

Connor also made an appeal to the federal government should do everything it can to continue providing the best health care for those who have served.

Zachary Restucci, 8, of Amherst, was among the youngest attending the ceremony, holding an American flag and wearing the attire of Cub Scout Pack 500, which meets at the South Amherst Congregational Church.

"I feel honored," said Zachary, observing that his father and grandfather are both veterans.

Veterans on hand were Don Moran, who served in the Army between 1958 and 1966 during what the Berlin crisis era.

Like others, he reflected on the outcome of the presidential election and the sacrifices that guarantee citizens can vote in quadrennial national elections.

"It's a privilege to come because of the people who have lost their lives in the past, so that we can come together and have elections every four years," Moran said.

Scott Merzbach can be reached at smerzbach@gazettenet.com.