Amherst honors those who served for ‘a greater cause’

Amherst honors those who served for ‘a greater cause’ 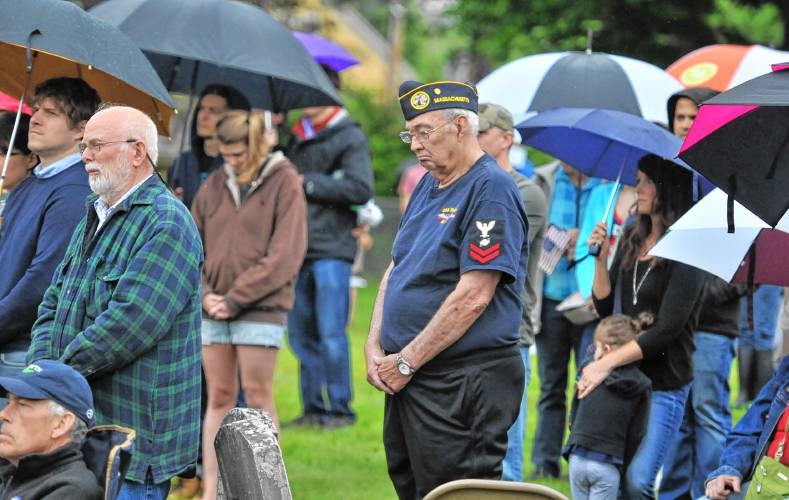 George Murphy, of Holyoke during the ceremony at the Florence Memorial Day Parade Monday morning. Amherst, Florence and Easthampton were among the many communities honoring veterans on Monday.

By Chance Viles For the Gazette

AMHERST — Like many veterans of his era, Rob McAllister enlisted in the military out of anger shortly after the Sept. 11 attacks, seeking to fulfill a desire to take action against injustice.

Two years later, McAllister found himself taking part in the invasion of Iraq as a member of the Airborne Long-Range Surveillance and Reconnaissance team.

But on Monday, as the final speaker at the town’s Memorial Day commemoration, McAllister talked about his service not through personal anecdotes or stories, but rather what invoked him to join the military and go to war.

"It’s about selfless service,” McAllister said. "This day is not about individual stories of heroism. It is about fighting for something bigger, fighting for a greater cause.”

In addition to McAllister, the ceremony inside the Amherst VFW Post 754 — rain cancelled a parade originally scheduled to precede the event — featured other veterans and local politicians who gave moving testimonies as to why Memorial Day is important to them and the community.

Speakers talked about the military service of their relatives, or that of their own, to both honor and remember fallen soldiers.

"This is an important day for me, both my parents were veterans,” Amherst Town Manager Paul Bockelman said. "My dad was a prisoner of war and came back to the American dream.”

The VFW Chaplain Anita Morris spoke about the continual need for remembrance of the fallen before she lead the audience in a prayer.

"Even as we remember the past, we must look to the dangers of the future,” Morris said.

Amherst-Pelham Regional High School junior Doug Eveleigh then sang the national anthem with the help of the crowd.

Veterans agent Steven Connor had World War I veterans on his mind, specifically those who had served under the regiment from Massachusetts.

Connor honored the 5,775 soldiers from Massachusetts who lost their lives in that war, which the United States entered in early April a century ago.

"It was a Mass regiment that was the first to be honored for bravery by a foreign power,” Connor said proudly to the crowd. 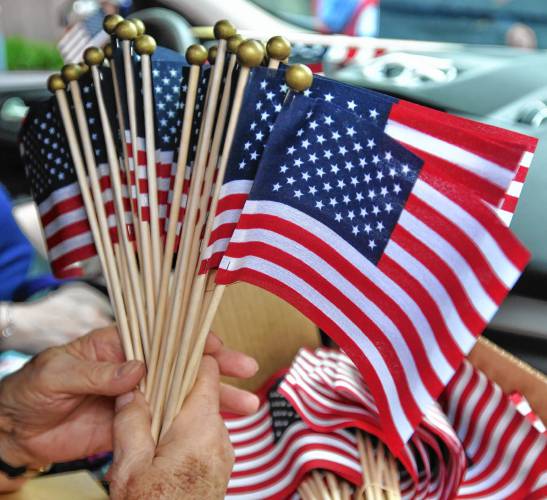 Remarks were then made by both state Rep. Solomon Goldstein-Rose and Select Board member Connie Kruger. Goldstein-Rose read a proclamation written by Gov. Charlie Baker, honoring fallen soldiers from Massachusetts.

"It is appropriate that all Mass. citizens remember the bravery of those who gave their lives so their sacrifices serve as a reminder the cost of our freedom,” Goldstein-Rose read.

Kruger drew from more of a personal experience in her speech.

The daughter of a veteran stressed the personal connection many Amherst residents have to veterans and the sacrifices they made, pointing out that the room would be empty had everyone not had a relationship with the military in any way.

"Preparing for this I thought about my dad who was in the Air Force in World War II,” Kruger continued, "And my mother, who had moved with him, and how it had affected their lives.”